Ashgabat, December 11, 2017: On 11 December 2017, the UN Regional Centre for Preventive Diplomacy for Central Asia (UNRCCA) conducted a Meeting of Central Asian Foreign Ministers, on the occasion of the Centre’s 10th anniversary and the International Neutrality Day. This meeting, which brought together Ministers and Deputy Ministers from the Republic of Kazakhstan, the Kyrgyz Republic, the Republic of Tajikistan, Turkmenistan, the Republic of Uzbekistan, as well as the Islamic Republic of Afghanistan provided an opportunity to exchange views on peace and security developments in the region, and agree on ways to enhance regional cooperation, with the support of UNRCCA.

Addressing the Ministers and Deputy Foreign Ministers, the Special Representative of the UN Secretary-General, Head of the UN Regional Centre for Preventive Diplomacy for Central Asia (UNRCCA), Ms. Natalia Gherman underlined that the UN as a whole and the UNRCCA, in particular, welcomed the increased potential for regional cooperation, and emerging opportunities to further advance preventive diplomacy in Central Asia. 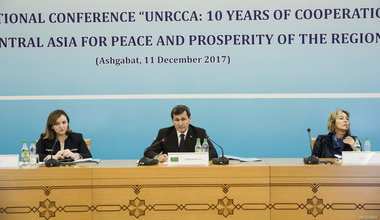 During the meeting, participants expressed their support to the Centre’s fourth Programme of Action for the period 2018-2020, focused on supporting Central Asian states’ efforts to address existing and emerging challenges and threats that the region is facing. Within this framework, SRSG Gherman outlined the Centre’s planned activities for 2018, which range from water diplomacy, preventing extremism and countering terrorism, building preventive capacities in the region to supporting integration efforts between Central Asia and Afghanistan.

The meeting concluded with the adoption of a Joint Declaration, which welcomes General Assembly resolution 72/7 on the role of UNRCCA and underlines the importance of consolidating regional dialogue and cooperation mechanisms in Central Asia.

Following this event, all participants were invited to attend the international conference titled: “UNRCCA: 10 years of cooperation with Central Asia for peace and prosperity in the region”, hosted by the Ministry of Foreign Affairs of Turkmenistan and jointly organized with UNRCCA. Discussions during this event focused on the Centre’s activities over the past decade and its contribution to peace and security in Central Asia. Participants also underlined the Centre’s crucial role in fostering cooperation between Central Asian states, recommitted to the principles of preventive diplomacy and called upon the Centre to continue its efforts in facilitating dialogue in the region.

In the past decade, UNRCCA has actively worked to promote preventive diplomacy in the region and to mainstream Central Asian peace and security issues into the UN’s global agenda. In June 2017, the Centre coordinated the visit of Secretary-General Antonio Guterres to the region, who encouraged all Central Asian states to closely cooperate in support of peace, security, human rights and development for all in Central Asia.

Click Here to view the Joint Declaration adopted at the Meeting of Central Asian Foreign Ministers, on the occasion of the Centre’s 10th anniversary and the International Neutrality Day

25 May 2022
SECRETARY-GENERAL’S MESSAGE ON AFRICA DAY