During this event, UNRCCA organized the first-ever Government-Youth Dialogue for Central Asia and Afghanistan. In this session, young people from all six countries had the opportunity to present their views on regional peace and security issues, including the contributions that young people themselves can make – and in many cases already are making. The dialogue was the culmination of the UNRCCA Preventive Diplomacy Academy project in 2019.

The publication, “Messages Delivered by Young People at the First Government-Youth Dialogue for Central Asia and Afghanistan,” contains the messages of these young leaders from across the region, as they shared them with the Deputy Foreign Ministers in Tashkent. They are divided into five themes – intercultural exchange, youth participation in decision-making, the fight against terrorism, gender equality and preservation of the region’s water resources. 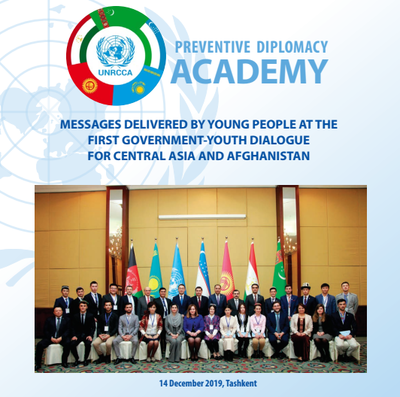 This year marks the 75th anniversary of the founding of the United Nations, and UNRCCA Preventive Diplomacy Academy has combined its youth engagement efforts with the global UN75 initiative.

On 1 June 2020, UNRCCA Preventive Diplomacy Academy launched an essay contest for young people from Kazakhstan, Kyrgyzstan, Tajikistan,Turkmenistan, Uzbekistan and Afghanistan entitled “Youth Voices from Central Asia and Afghanistan: UN75 and Regional Peace and Security.” More than 50 entries from young people describing their vision of the world in 2045 have been received.

The publication below offers a sneak-peek at the winners and their essays. The full essays will be translated and printed in a compendium later in the year, on the occasion of our second Government-Youth Dialogue. 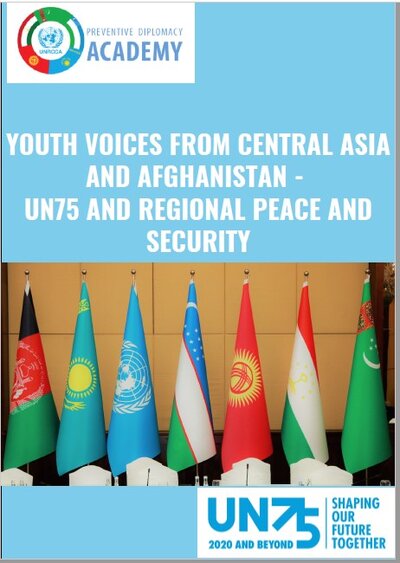