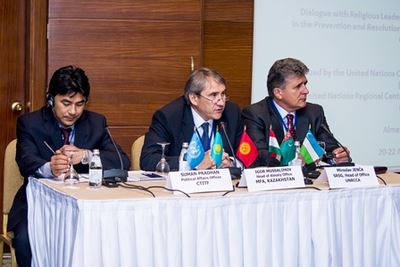 On 20-22 November 2013, a 2.5 day regional workshop was held  in Almaty, Kazakhstan as a dialogue between leaders of religious institutions and security officials on cooperation towards countering extremism and preventing conflicts.

The workshop was designed with three objectives:

Participants expressed concerns for the way that religion is being incorrectly used for political purposes to recruit the youth for extremist, radical and violent movements. They argued for the freedom of religion as an important right that should not be suppressed. Lack of knowledge about the true principles of main religions in the region makes the youth particularly vulnerable to misinterpretation and to the spread of ideas that incite hatred. They together came up with a series of recommendations for follow up activities and strategies to be undertaken by security officials, religious leaders and international organizations.