Engaging the Media in Countering Terrorism in Central Asia 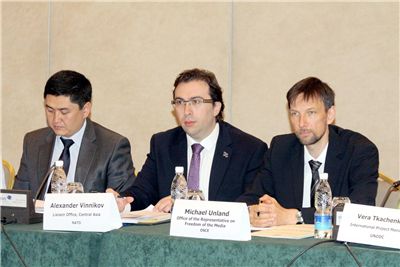 The objectives of the regional workshop were:

•To raise awareness of the media’s role in counter-terrorism and to build the skills of  representatives of Central Asian media and government communications offices in engaging in the fight against terrorism, including in developing effective counter narratives and counter incitement, and

•To raise awareness among representatives of the media and government communications offices about the importance of cooperation between government and media/civil society organizations in countering the appeal of terrorism and practical and ethical means for such cooperation.

Participants discussed the challenge of cooperation between the media and the government in ways that ensure that counter terrorism efforts do not erode the freedom of the press. The task at hand is to strike the right balance between ensuring the principles of freedom of media and guarantees for free public access to information on the one hand, and, on the other hand, curbing the use of media for terrorist propaganda.

After discussing the specific motivations and means that terrorists make use of the media for their narratives, recruitment and propaganda purposes, participants concluded that sustained cooperation would be necessary between the governments (including security officials) of the region and representatives of the media in order to counter this usage.  This relationship, however, should be voluntary and not compromise the principles of a free and objective media, since this would undermine its credibility and could be counterproductive.  They came up with a set of recommendations for concrete follow up activities and strategies to this effect.