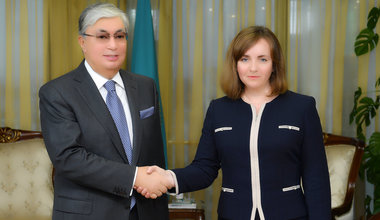 Astana, November 8, 2017: On 6-8 November 2017, UN Secretary-General's Special Representative and Head of the UN Regional Center for Preventive Diplomacy for Central Asia, Natalia Gherman, paid her first official visit to Astana and met with the Minister of Foreign Affairs of Kazakhstan, Kairat Abdrakhmanov, Deputy Foreign Minister Erzhan Ashikbaev, and the Speaker of the Senate, Kassym-Jomart Tokayev.

(SRSG Natalia Gherman with the Speaker of the Senate, Kassym-Jomart Tokayev)

The sides had a fruitful exchange of views on the overall state-of-play in Central Asia as regards regional security and stability, discussed cooperation with the Regional Center in implementing its preventive Mandate, including on the basis of the upcoming Programme of Action 2018-2020. The Kazakh side reiterated its utmost support to the Centre’s active engagement in facilitating and assisting five states of Central Asia resolving pressing issues such, as countering terrorism and extremism, transboundary water management, and cooperating with Afghanistan. Activities within the framework of the Presidency of Kazakhstan in the UN Security Council in January 2018 were discussed as well.

During the visit to Astana, SRSG, N.Gherman, also had meetings with heads of the OSCE, EU delegations in Kazakhstan, UN Resident Coordinator and the UN Country Team, as well as with the Diplomatic Community based in Astana.
Press Releases
Public Outreach
Press Releases 2017
Print Email Twitter Facebook