Tashkent, November 11, 2017: The Special Representative of the UN Secretary-General, Head of the UN Regional Center for Preventive Diplomacy for Central Asia (UNRCCA), Ms. Natalia Gherman, paid an official visit to the Republic of Uzbekistan on 9-11 November.

On November 9, Ms. Gherman and the UN Assistant Secretary-General for Political Affairs, Mr. Miroslav Jenca, had a meeting with President of the Republic of Uzbekistan, Mr. Shavkat Mirziyoyev.

At the meeting, the President of Uzbekistan underscored productive cooperation of Uzbekistan with the United Nations and highlighted the initiatives of the country regarding constructive solutions to the security, stability and longstanding development issues in Central Asia. 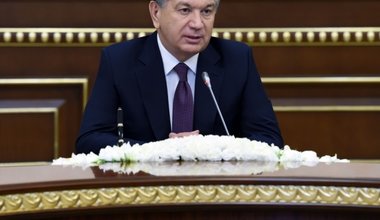 The President of Uzbekistan reiterated his utmost support to the Centre’s active engagement in facilitating and supporting five states of Central Asia in the field of counter-terrorism and extremism, transboundary water management, and cooperating with Afghanistan.

(President of the Republic of Uzbekistan, Mr. Shavkat Mirziyoyev at a meeting with SRSG Ms. Natalia German and ASG Mr. Miroslav Jenca )

During the visit, Ms. Gherman also met with First Deputy Chairman of the Senate of the Oliy Majlis of the Republic of Uzbekistan, Mr. Sodiq Safoyev, Minister of Foreign Affairs, Mr. Abdulaziz Kamilov, Deputy Minister of Agriculture and Water Resources, Mr. Shavkat Khamraev to exchange views on the developments in Central Asia, cooperation on security and regional stability, collaboration with the Regional Center on implementing preventive initiatives in the region.