On March 30, Natalia Gherman, Special Representative of the UN Secretary-General for Central Asia, Head of the UN Regional Centre for Preventive Diplomacy for Central Asia (UNRCCA), met Sadyr Japarov, the President of the Kyrgyz Republic, to discuss the political and socioeconomic reform process in the context of the upcoming constitutional referendum and the local as well as parliamentary elections. 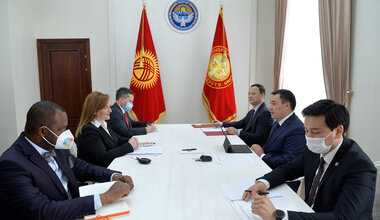 The SRSG informed that the UN closely follows developments in the country and underlined that it is important to conduct reforms in an inclusive and transparent manner, based on the rule of law, good governance and human rights principles, in line with the Joint Statement of Intent between the Government of the Kyrgyz Republic and the UN issued by both sides on 13 November 2020. She stated that such comprehensive approach would contribute to the trust building between the people and the authorities, which is crucial for long term stability and prosperity in the Kyrgyz Republic.

The SRSG informed about the current UN assistance to the Kyrgyz Republic under the Framework of Socio-Economic Response to alleviate the impact of the COVID-19 pandemic, the electoral assistance project and other programs.  The UN will further assist judicial and administrative reforms through expertise and technical assistance. The SRSG proposed to establish an UN-Kyrgyzstan Human Rights Dialogue, which would enable the timely provision of  necessary information exchange and expert support in all relevant areas.

In response, President Japarov outlined his strong intention to ensure that the rights of the people, including freedom of speech, are preserved and all international commitments of the country are respected. He underlined his personal responsibility for the reform process. The President thanked the UN for supporting the Kyrgyz Republic in the current challenging times and expressed strong interest to cooperate with UN entities in the specific areas of the reform agenda.