International Conference on Security and Development in Samarkand

International Conference on Security and Development in Samarkand

Samarkand, November 11, 2017: The United Nations Regional Center for Preventive Diplomacy for Central Asia jointly with the Ministry of Foreign Affairs of Uzbekistan and the Regional Office of the United Nations Office on Drugs and Crime in Central Asia, hosted as a co-organizer an International conference “Central Asia: Shared Past and a Common Future, Cooperation for Sustainable Development and Mutual Prosperity”, which took place in the city of Samarkand on November 10-11, 2017.

The conference gathered more than 500 participants, including foreign ministers from Central Asian countries, high-ranking officials from the CIS countries, Europe, Asia and America, heads of international organizations, including the UN, EU, OSCE, SCO, CIS, EBRD and representatives of the diplomatic corps.

Opening the conference, Special Representative of the Secretary-General, Head of UNRCCA, Ms.Natalia Gherman, underlined importance of regional dialogue on a permanent basis at all levels and the readiness of the UNRCCA to support all initiatives of Central Asian states aimed at enhancing security and stability in the region.

The two-day forum allowed to discuss specific areas for enhancing cooperation between the Central Asian countries in the political, trade-economic, investment, transport-communication, water-energy, environmental and cultural-humanitarian areas, as well as the role of international organizations and partner countries in implementing regional development projects and building the capacity of countries to face modern challenges and threats. 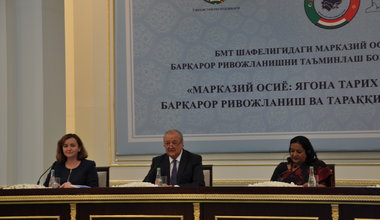 The UN Regional Center for Preventive Diplomacy for Central Asia, as a co-organizer of the conference, hosted the Session dedicated to cooperation of Central Asian states on water use and ecology, which was moderated by the SRSG Natalia Gherman. The debate highlighted the need to unite efforts in resolving disagreements on water-energy issues in Central Asia and called all interested parties to enhanced cooperation.

Participants of the conference adopted a Final Communique, which reaffirmed that the meeting provided an opportunity for open and comprehensive discussions on a wide range of issues of regional significance in Central Asia.