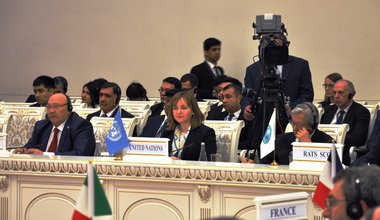 The participants acknowledged that peace and security in Afghanistan is underpinned by close counter-terrorism and counter-narcotics cooperation and regional economic interaction and connectivity.

The Conference recognized the importance of international and regional initiatives to support peace and stability in Afghanistan that is Afghan-led, and Afghan-owned.  At the outcome, the Conference has adopted the Declaration reiterating the significance of the Resolutions and the decisions of the UN General Assembly and Security Council including on the new partnership formed between Afghanistan and Central Asia following the UN Security Council Meeting on Central Asia and Afghanistan held on 19 January 2018 in New York. In particular, the Declaration supports Central Asian states’ efforts toward advancing the peace process and socio-economic development of Afghanistan, and their involvement in regional political and economic processes. .

25 May 2022
SECRETARY-GENERAL’S MESSAGE ON AFRICA DAY