On 14 June 2018, the United Nations Regional Centre for Preventive Diplomacy for Central Asia hosted a partnership meeting to present the Centre’s water-related activities and in particular the project titled “Strengthening Cooperation on Trans-Boundary Water Sharing in the Aral Sea Basin.”

Special Representative of the Secretary-General for Central Asia, Natalia Gherman, briefed participants on the results achieved in building partnerships in water management in Central Asia and presented the Centre’s plans in this area for the remainder of 2018 and 2019. 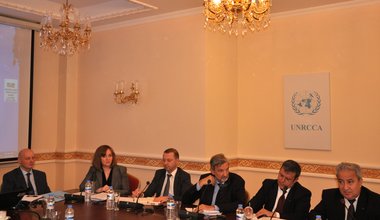 In her remarks, SRSG Gherman highlighted the new positive dynamics in the region that are providing a window of opportunity to make concrete progress on trans-boundary water management. She invited those in attendance to partner with UNRCCA to support, including by co-sponsoring the Centre’s ongoing and future activities in this field.

Representatives of diplomatic missions and partner organisations such as UNDP, GIZ, the OSCE, the EU, the EBRD, the USAID and others took part in the event. Participants expressed support for the UNRCCA and described some of their own projects that may have relevance for the Centre’s efforts.

During the meeting, a representative of the Turkmen chairmanship of the Executive Committee for the International Fund for Saving the Aral Sea (IFAS) made a short presentation about the chairmanship’s programme and preparations for the IFAS Summit that would take place in Ashgabat in August 2018.